The way that we view our bodies and feel existing in them is of the utmost importance. Body image can influence our self-view, feelings of worth, and fulfillment with our lives and ourselves. A negative or toxic body image has implications that can vary from feeling uncomfortable in one’s skin to having low self-worth to developing disordered eating, exercising, and living habits. Body Dysmorphic Disorder is commonly discussed in disordered eating circles and important to explore for anyone that loves or works with someone with an eating disorder.

You are likely aware that body image involves the representations an individual has about their physical appearance. What is less commonly discussed is that body image is the subcategories body image can fall into – perceptual, affective, cognitive, and behavioral [1].

Perceptual body image refers to how an individual perceives their body. For example, feeling that they are “too thin” or have a body part that is “too big.” Affective body image is the feeling that one has about their body, “especially the amount of satisfaction or dissatisfaction you experience in relation to your appearance, weight, shape, and body parts [1].”

Cognitive body image refers to the thoughts and beliefs that individuals have about themselves. Finally, behavioral body image includes the behaviors individuals engage in as a result of their body images, such as disordered eating, excessive exercising, or self-harming behaviors.

Considering body image from each of these perspectives can help an individual look more deeply at how they relate to their body and learn which area their self-view and body image is most harmful. 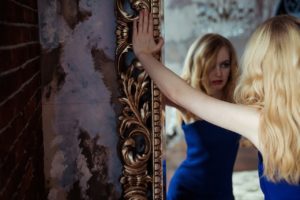 For an individual with Body Dysmorphic Disorder (BDD), all 4 of these areas of their body image are likely distorted. Individuals with BDD go beyond having negative thoughts about their body to have an “intense preoccupation with a perceived flaw in one’s physical appearance [2].”

Typically, these perceived flaws are non-existent or so insignificant that others do not perceive them. Even so, being told this will not decrease the obsessiveness these individuals feel.

“BDD is a distressing condition which is often associated with depression, social anxiety, and feelings of shame. BDD often creates significant interference with day-to-day activities, as it can limit one’s desire to leave the house, socialise, and participate in activities such as work or study [2].”

BDD is commonly associated with eating disorders, as individuals will engage in disordered eating and exercise behaviors to alter a perceived flaw. A recent study found that Anorexia Nervosa and BDD also have a neurological component in common.

The study, completed by UCLA researchers, determined that “found that abnormalities in brain function are related to severity of symptoms in both disorders, and may be useful in developing new treatment methods [3].”

One study creator, Dr. Wesley Kerr, stated, “these are brain abnormalities, and how we treat those brain abnormalities could be with psychotherapy, or psychiatric medications, but brain changes need to happen in order to address these disorders [3].”

This study, and numerous others, serve to remind us that disorders such as anorexia nervosa and BDD are not simply choices related to eating (or not eating) food. These disorders are much complex, with biopsychosocial components that must be considered.

Margot Rittenhouse, MS, PLPC, NCC is a therapist who is passionate about providing mental health support to all in need and has worked with clients with substance abuse issues, eating disorders, domestic violence victims, and offenders, and severely mentally ill youth.

As a freelance writer for Eating Disorder Hope and Addiction Hope and a mentor with MentorConnect, Margot is a passionate eating disorder advocate, committed to de-stigmatizing these illnesses while showing support for those struggling through mentoring, writing, and volunteering. Margot has a Master’s of Science in Clinical Mental Health Counseling from Johns Hopkins University.